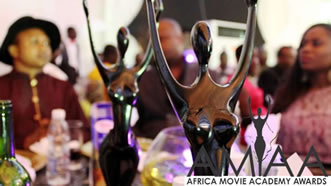 The Awards Ceremony was hosted by Nse Ikpe Etim, an Nollywood actor. The event was well attended by Actors from Nigeria and other African Countries. Indeed, it could be said that the event was one of glitz and glamour, as guests in glamorous outfits posed on the Green Carpet.

The event was formally declared open by the Representative of the Executive Governor of Lagos State in person of the Deputy Governor, her Excellency Mrs Idiat Oluranti Adebule. Lagos State promised support for the creative industry.

Some of the Award winners of the Night included Nigeria historical Drama ’76, which won three awards from its eight nominations and the “Lifetime Achievement Award” by the organisers, as special recognition honour to veteran comic- actor Nkem Owoh.

Mrs. Peace Anyiam –Osigwe, the founder of AMAA encourages all to use the motion pictures to tell the African story.

The Awards Ceremony is a good platform to explore the African Movie Industry to promote the .ng brand. Nollywood in particular, is a sector which has grown is leaps in recent years and is doing as fantastic job promoting local content. The local hosting of its content would save Nigeria a lot of capital flight, create jobs locally whilst providing or educating the world on the cultural values of Nigeria.

NiRA is exploring the possibility of collaborating in the areas of copyright protection, growth and export of local content amongst others.