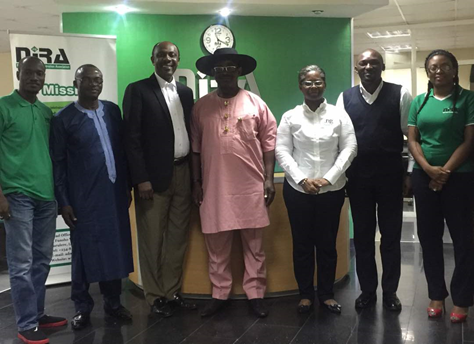 On Friday, 13th of October 2017, Senator Foster Ogola, the Vice Chairman, Senate Committee on ICT & CyberCrime and the Chairman, Conference Planning Committee visited NiRA Office Complex together with other members of his team. They were received by the NiRA President, Reverend Sunday Folayan and the Management Staff of NiRA Secretariat.

The Honourable Senator came to inform NiRA about the upcoming 2017 ICT Cybersecurity Week being hosted by the Senate Committee on ICT and CyberCrime at Zeus Paradise Hotel at Abuja from 6th to 9th November 2017.

To ensure a safe country, the Senate had considered a motion on “Worrisome Dimension of Cyber Attacks and Criminality: Urgent Need for Concerted Efforts to Secure Nigeria’s Cyberspace” and thus mandated the Senate Committee on ICT and Cybercrime to address the issue in collaboration with relevant stakeholders in the country. It was on this basis that the Senator’s committee decided to visit and invite NiRA to be part of the 2017 ICT and CyberSecurity Week.

The President of NIRA took the opportunity to brief the Senator on NiRA’s activities in combating cybercrimes. He mentioned the advisory role of the NG Internet Crime Advisory Group (NiCAG), whose members cut across the Law Enforcement Agencies, Financial institutions and Government Establishments.

The President NiRA congratulated the Senate on this noble initiative of the ICT and CyberSecurity Week and promised that NiRA would be in attendance, noting the event is holding during the same period (7th to 9th October 2017) of eNigeria in Abuja.