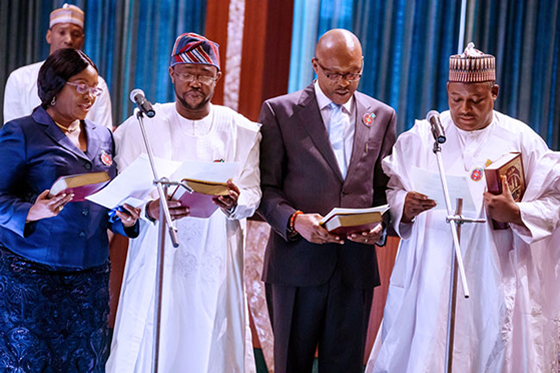 The Executive Board of Directors and staff of the Nigeria Internet Registration Association (NiRA) felicitate with Mr. Tope Fashedemi on his recent appointment as the Permanent Secretary from the Ministry of Communications and Digital Economy. Recall that Mr. Tope Fashedemi was a director on the Executive Board of NiRA till the end of his tenure in April 2016 and was a pioneer member of the NiRA Board of Executive Directors.

He was sworn in as a Perm Sec by President Muhammadu Buhari GCFR on Wednesday 18th December 2019.

Up until his appointment as Permanent Secretary, Mr. Fashedemi served as the Director, e-Government in the Federal Ministry of Communications and Digital Economy and supervised the production of the Federal Government’s “e-government Master Plan” in collaboration with stakeholders.

The approved deployment of Mr. Tope Fashedemi is to the Office of the Head of the Civil Service of the Federation (OHCSF) – Special Duties Office (SDO).

NiRA wishes Mr. Tope Fashedemi a successful tenure in his new role and looks forward to working closely with the Permanent Secretary to further strengthen the ICT sector in Nigeria and promote the usage of the Nigerian Online Identity (.ng).