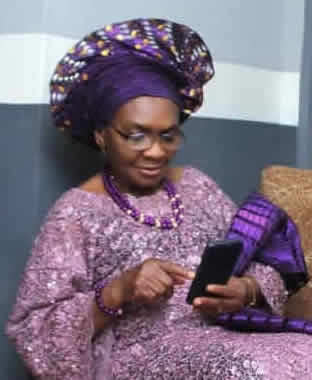 Wednesday, 4th of March 2020 marked another memorable day in NiRA as a member of the NiRA Board of Trustees’ (BOT), Professor Adenike Oyinlola Osofisan had a Valedictory/Send forth Ceremony celebrated in her honour at the Distance Learning Centre of the University of Ibadan, Oyo state. The ceremony, which also marked Prof. Osofisan’s 70th birthday, was organised by the Department of Computer Science of the University and  Doctoral students of Prof. Osofisan.

Representatives from NiRA who witnessed the event included two members of the NiRA Board of Trustees, Dr. Chris Nwannena and Mr. Shina Badaru and staff from the NiRA Secretariat, Mrs. Edith Udeagu, Mr. Ikechukwu Ezeji, Mr. Taiwo Oyeyemi and Mr. Dele Awotunde. Members of the Nigeria Computer Society (NCS), the university community and family members were present at the event.

During her valedictory speech, Prof. Osofisan thanked the staff and students of the Computer Science Department as well as all her doctoral students for putting together the event in her honour. She delivered a speech titled “The Story of my Stewardship – Reminiscences” during which she recounted how she joined the services of the University as a Youth Corps member in August 1976. Her services as a Help Desk Officer/Programmer at the University of Ibadan Computing Center/Information Technology and Media Services (ITeMS) was rewarded with a one-year temporary appointment at the end of her Youth Service year. She travelled to Georgia Institute of Technology for her Master’s in Computer Science in August 1978 and took up a lectureship with The Polytechnic Ibadan upon her return in 1979.

In 1999, She began another phase of her career as the Head of Department of Computer Science at the University of Ibadan. Under her watch, the department grew from four to twenty-one teaching staff and developed a vibrant post-graduate programme that has produced up to thirty-nine PhD graduates. Among this group, she personally supervised nineteen PhDs while the twentieth is work in progress. Prof. Osofisan pioneered research in the areas of Internet Technology, Data Mining and Machine Learning as well as Data Warehousing and Human-Computer Interaction. She is the author of over eighty influential publications in the field of Computer Science that appeared in reputable local and international journals and conferences. She also served as the first Director of the University of Ibadan Business School between 2012 and 2014.

Prof. Adenike Osofisan was one of the only twenty-two women in Nigeria inducted to the Women Hall of Fame on June 10, 2019. Having excelled in a field in which there is male domination, Prof. Osofisan is an icon in the community promoting girls involvement in STEM and a strong advocate for attracting the girl child into Information Technology fields.

The Board of Trustees, Executive Board of Directors, Executive Secretary and the entire NiRA ecosystem wish Prof. Adenike Osofisan a Happy 70th Birthday and are proud to be associated with her laudable achievements.