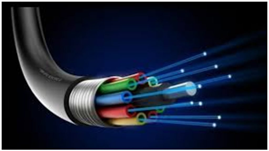 Under the visionary leadership of Governor Babajide Sanwoolu, Lagos State has built 2600km out of a 3000km fibre project for 2020. This project connects over 1000 Telecom base stations of MTN, Airtel and a signed agreement with Liquid Telecom, Mainone, Dolphin Telecoms, Swift and Spectranet for efficient and affordable network connectivity.

According to the Lagos State government, the fibre duct infrastructure is an open-access project expected to promote the fast expansion of mobile services in Lagos while also serving as a launching platform for 4G technology, which is more efficient and affordable broadband connectivity in Lagos State.

While MTN, Airtel and other telecoms companies have subscribed to the project as their 4G launchpad to several parts of Lagos, the Lagos State government is negotiating with the various other mobile network operators and internet service providers domiciled in Lagos to expand their connectivity base which will be to their advantage. The signed agreement with the Public-private partners on universal coverage of all local government development areas in the state is to ensure inclusive development in the smart city for global competitiveness.

The importance of this innovative Lagos State unified duct fibre project cannot be undermined, as it reverberates across the global ICT community. It places Lagos State amongst the smart cities of the world and will ultimately attract foreign investors to data centres in the state for the 12 newly connected data centres. The unified duct project would also accelerate the growth of business subsidiaries all over Lagos State while positioning the state as the flagship hub of technology and fintech businesses in Nigeria when compared to activities in the other states.  The West Indian Ocean Cable Company, WIOCC, which manages over 75000km of terrestrial fibre and provides services to Google, Facebook, Microsoft, Amazon and other leading telcos globally, said that the Lagos State unified fibre project is a crucial step to achieving optimal and affordable internet connectivity and the new way to speed up Lagos smart city plan.

The Lagos State Governor’s vision for the 3000km unified fibre project is manifesting as the successful driver for Google’s Equiano submarine cable, Facebook’s 2 Africa submarine cable and the evacuation of large-scale broadband capacity. Also, over 100 schools within the state are already connected while all other institutions, markets, government offices and markets will also get connected in a few weeks, with free broadband forming the main connectivity backbone for the CCTV cameras installed and managed by the State Government to help detect and reduce crime rates in the city.

This would, invariably, create more jobs for youths and impact the country’s economic growth.